First, We Start At The End

This morning I had the distinct displeasure of taking my 14yr cat, Samantha, to the vet for a “quality of life” discussion. At 10:22am PT, she breathed her last breath; she reached the finish line of a lifelong marathon. She was such a good, sweet cat.

Sam had a pretty healthy life for 13 years. The only concern we ever had for her was her allergy to fish (seriously, that’s a crap allergy for a cat to have, given its ubiquitous use in cat food, etc). Then about a year ago, she had a one-off seizure. She didn’t lose any control of her bodily functions, and at the time we were pretty concerned about it. She never had another one, but I should have realized then that we were starting a countdown clock for her.

Six months ago she got really lethargic. Weight loss, lack of interest in eating and drinking… We thought she was going to go. We took her to the vet and to our surprise and elation, they had a solid lead - her thyroid was failing. So we got her on thyroid medication and she regained her movement and took an interest in eating again. In fact, she even started to crave wet food. In her entire life to that point, she never wanted wet food. For four months we seemed to be in the clear again. She was feisty again and resisted all efforts to take her medication. Bite wounds abound.

Then a couple of months ago, she got a urinary tract infection. That infection pretty much put an end to the whole thing. She started losing weight again, got dehydrated, and just couldn’t recover. She dropped to 1/2 of her pre-thyroid weight. She still ate and drank, but her energy levels kept dropping. We addressed the UTI with medication and got past it, but her health didn’t recover. I took her to the vet this morning and we were informed that her breathing had become labored, and that she was substantially dehydrated.

The labored breathing information just did me in. That was when I knew it was time. 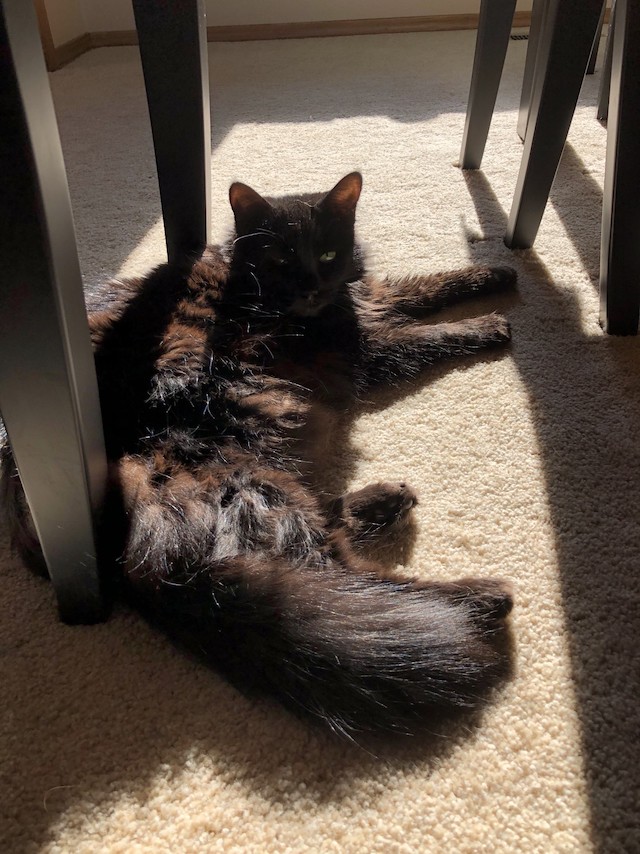 I adopted Sam in November 2008. I don’t remember the day or time, but I did adopt her from a local shelter that happened to be using a nearby PetSmart to drum up interest in adopting shelter pets. I have absolutely no idea how Samantha was up for adoption. She was this beautiful and sweet fluffy black cat, estimated to be 8 months old at the time. When I say sweet, I really mean it. In her 13 years with me, she never clawed a person; she never hissed at people; she never batted things off of shelves. All she ever did was follow me from room to room and purr as loudly as a Harley-Davidson motorcycle. My mind is still boggled, even now, that she was available to adopt in the first place.

That first night she proceeded to try her damndest to sleep on my mother’s neck and face; my mother is allergic to cats. Sam quickly developed a penchant for trying to (lovingly) bite and lick noses, ears, faces, you name it. She eventually settled on going after hands and fingers most. It would never hurt, but it sure was weird. She acted like a dog more than anything else.

She got to overlap with another cat, Dusty, for about 2 months. Dusty passed quickly after Samantha arrived, and the way in which he passed ended up being pretty foreboding - if we’d have lost Sam when her thyroid started to fail, then all of her symptoms would have exactly matched Dusty’s when he went. She lasted 6 months after that, but the similarities are all there.

After Dusty passed, she had the run of the place herself, aside from Pepper the dog. Sam wanted to be friends with Pepper, and Pepper did not care - she was all about the humans. Sam eventually stopped trying and just glommed herself on to me permanently.

Due to life-changing events in 2011, Sam and I were apart for a year and a half. She got to stay with a close friend for that time, but then she returned to me when I moved into a place that allowed pets in mid-2013. She was with me up until this morning (well, minus a 3-week period in the move to Oregon when I was the advance guard). 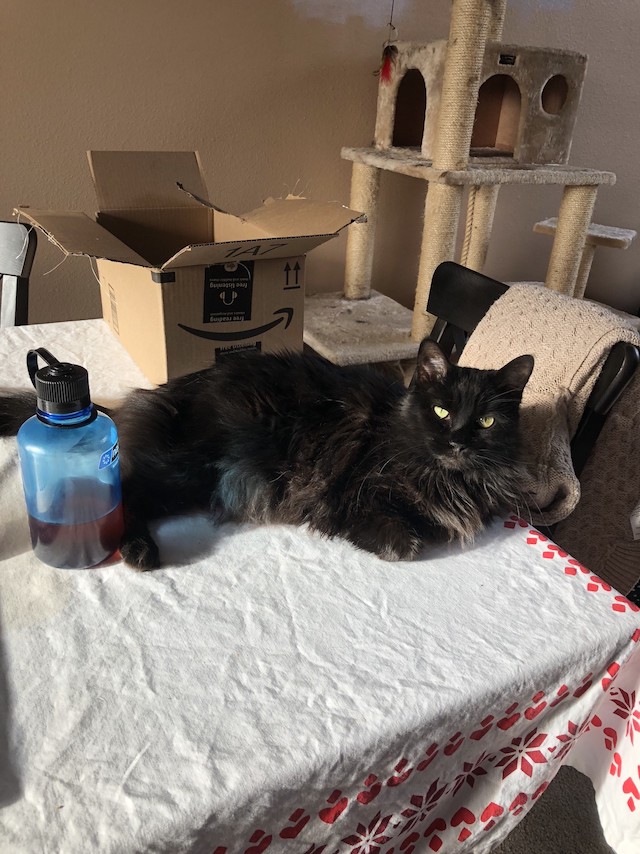 Very soon after Sam and I were reunited, I got food poisoning. I spent the day at home, curled up on my couch trying to just get past it all. She always spent as much time with me as she possibly could, but she clearly knew something was up this time. Rather than bother me for pets, try hard to lay on me, or otherwise try to lick and bite my fingers, she just hopped up next to me and laid there for hours. It was exactly what I needed.

Photographing Sam was always a near-impossible affair. Her very dark fur made most lighting conditions difficult - you’d need a lot of light to get any definition on her in a photo. Most of the time you’d just get this fluffy black blob with a couple of eyes looking out. Like a damn horror movie. As phone cameras improved over the years, the frequency in getting quality photos of Sam increased.

While Sam loved me most (unequivocally, I was her person through-and-through), she generally loved to get attention from all of the humans. She never seemed to care for other pets after her first, failed, attempt to befriend Pepper. Despite that we got another cat, Sebastian, in 2015. Sam seemed to want to play a bit more than we could muster as humans, so we thought a playmate would do the trick.

Nope. Sam never liked Seb. He’d try to play with her and she wanted nothing to do with it. He’d hunt her around the house and she’d just run or otherwise hiss at him. Poor Seb. He just wanted to play.

We eventually got Finnick the dog, and he just wanted to know more about the cats. Eventually he settled into a humans-first mode as well. The two of them never really interacted. 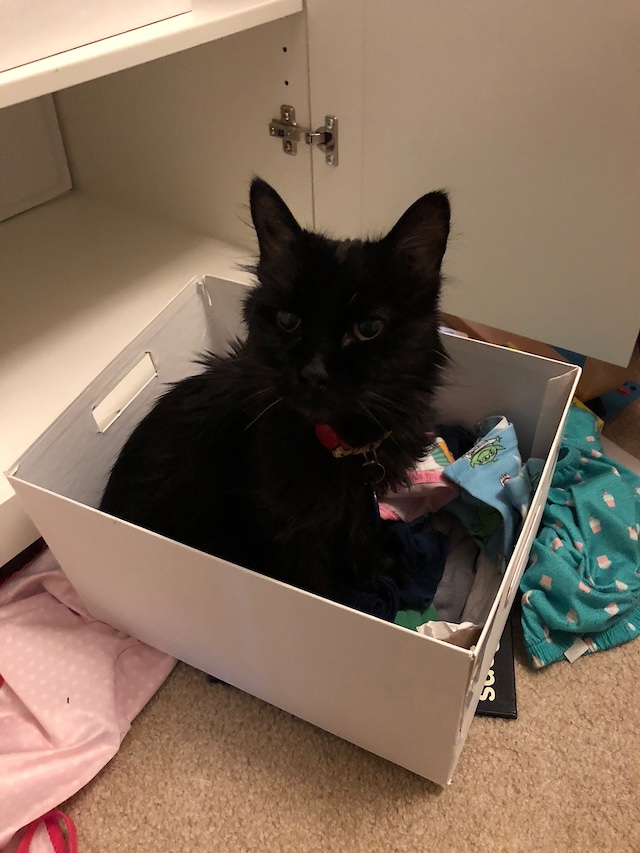 Even now I wouldn’t characterize myself as a cat person. I’ve had dogs my entire life. Dusty was the first cat I ever “owned;” he wasn’t mine; I only coexisted with Dusty for his final 6 years. Sam loved me so much, I was forced to adjust my approach to cats. She made me love her. Like, forced it upon my personality. What an inconsiderate cat, right?

When we made the move to Oregon in 2016, I was the advance guard for the family. I setup our home here, I created the landing zone for my wife and our 3 pets. When my wife was driving here, I called her at one point during the first leg of her trip. She had me on speakerphone while talking, and she had the three pets with her. As soon as Sam heard my voice on the phone, she immediately started to meow and move around and try to find where I was at. Further proof that I was her human; I existed to give her love, pets, and attention.

We’ve been in Oregon now for 5 1/2 years. The first 4 1/2 of those years were really great years for her. I mean, aside from learning she had a fish allergy. Do you know how cumbersome that allergy is? When we were trying to get her to gain weight, we couldn’t find many offerings at all that weren’t just inundated with fish oil. What a troublesome cat, right?

Sam wasn’t very bright. I don’t say this in a mean way, she just… wasn’t. When we eventually got an RFID-controlled food box for her, to ensure that Sebastian wouldn’t be able to access her food, she’d never remember how to get into it for a couple of minutes. Every time we filled up her food bowl and put it inside the box, she’d circle it a couple of times, looking for how to enter. Never mind that it was months and months where she just needed to get near the door for the RFID chip to unlock it. She didn’t wear a collar her entire life until needing the RFID chip.

I can get pretty long-winded, so I’ll wrap up here with a farewell to my Samantha. She was unarguably the best cat who ever catted. She was the sweetest pet I’ve ever had. Really fluffy and gorgeous. What she lacked in intellect, she more than made up for in warming my heart and forcing me, time and time again, to confront my general lack of patience when she’d scratch at the carpet and then look at me with all of the love and sweetness in the world.

I love you, Samantha Ludwick, and I will miss you. You’ll always be my cat. 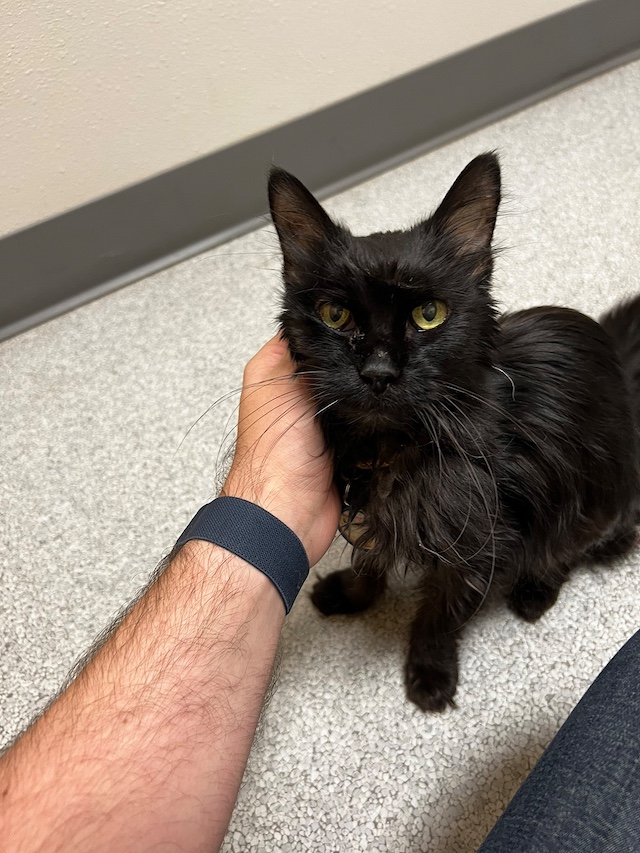